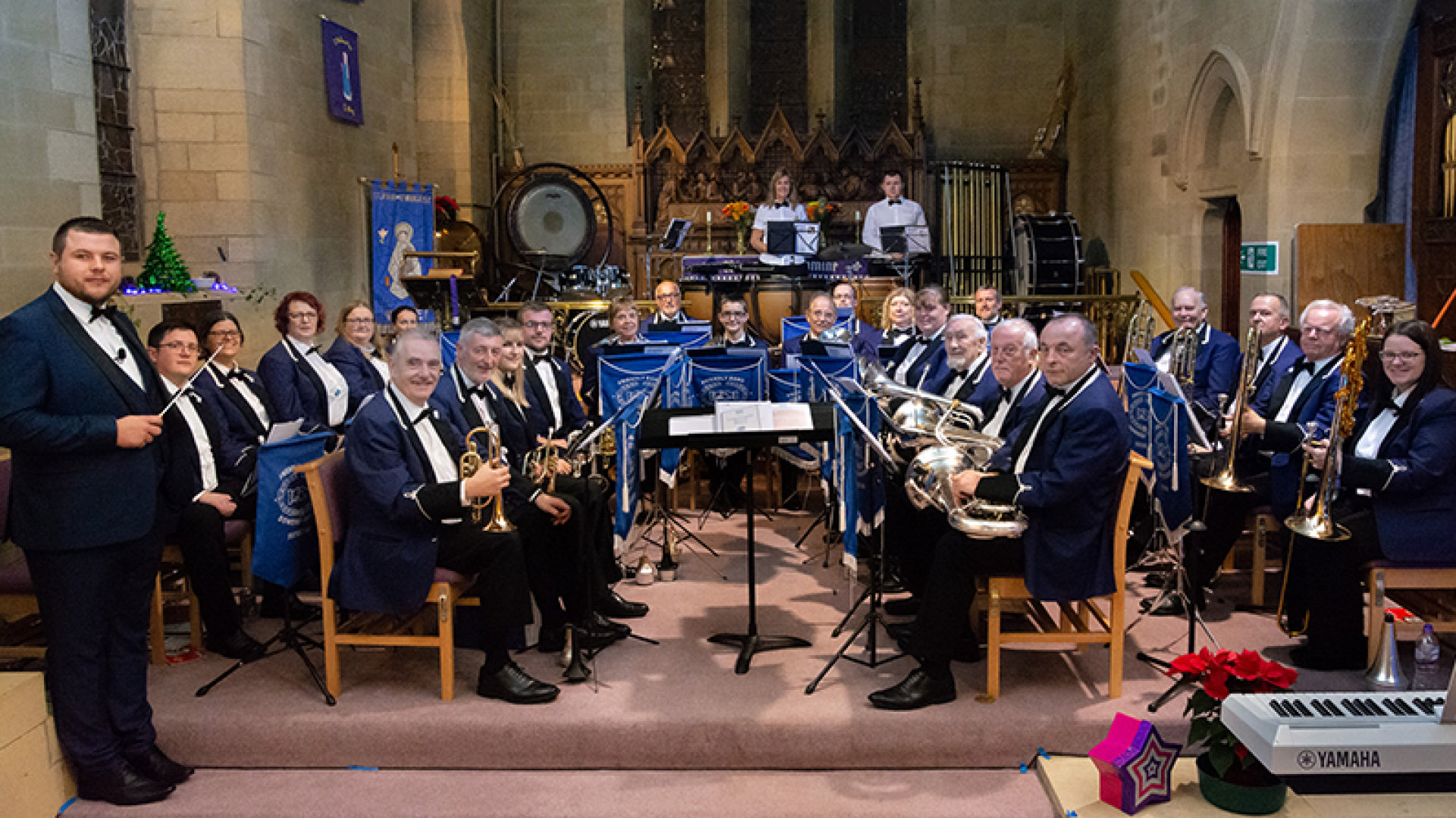 Many of the bands which exist in the area today can trace their origin well into the last centrury, and one of these is the Friendly Band, which dates back to 1868. No minutes are available, however, to check this point.

Among the founder members of the Band were Messrs. Harry Holland, George Hartley, William Lees, S Hartley, Jabez Hartley, Jos. Sutcliffe and Eli Ratlidge. Mr G Hartley, who may be described as the father of the band, died in 1922.

He told the story of how four or five of them set off and walked to Huddersfield. There they each bought, using their own money, an instrument. The idea being to sing and play at the Anniversary Services.

They started in a small way, but in time they were able to take a small room near the White Horse Inn. Later they moved to a small house in Water Hill, then to a room in the Friendly Inn. In 1891 a square wooden bandroom was buit at Water Hill, the deeds of which are still in possession fo the Band.

The Band had to leave the small house, in Water Hill, because the bandsman who owned it was getting married. He wanted to live there with his new bride. Later he had to sell his instrument to buy a cradle.

The first conductor of the Band was Mr G Hartley, who held the post for seventeen years.

Mr A Butterworth, a trombonist in the band, taught the Band to march by taking them up to Butts Green, down to Luddendenfoot and back to the bandroom.

During the first twenty years the band was in great demand for anniversaries etc. The sum of £62.00 was raised to purchase new uniforms, which were a great asset to the Band and led to many engagements.

For 38 years the Band played the Whitsuntide music for Christ Church, Sowerby Bridge.

During these years the Turners, Hartleys, Siddals and Oates were names much mentioned in connection with the Band.

In the 1920’s the ambition to have a new and up to date bandroom were realised. The site, of the present Friendly Snooker Club, was acquired and a building to accommodate 300 people, was built at a cost of £1400.00. Such a low figure was only possible because of voluntary labour. Mr G Hartley, founder member and conductor, cut the first sod and the Band played “For He’s A Jolly Good Fellow.”

The Band stayed at these premises at Tuel Lane top, until 1933, when due to financial difficulties, smaller premises had to be found.

On Sunday 31st May 1931, the Band played a live concert on BBC Radio Manchester. The performance was from 4.15pm to 6.00pm and the Band were given the instruction “Sixty minutes of band music, altogether. Please choose works which are suitable for Sunday”. For this performance the Band received the princely sun of fifteen Guineas.

After leaving the Concert Hall, the members of the Band used each other’s homes in which to practice, and anywhere else that they could find.

In 1936 the Band moved to a wooden bandroom opposite the Friendly Inn. This was a temporary move which lasted until January 1985, almost fifty years.

This “temporary” bandroom was purchased for the sum of fifteen Guineas which was payable on a hire purchase scheme. It had no running water, or toilets, in fact the gentlemans’ urinal was made from an old trombone which was plumbed under the floor of the bandroom to the outside. The unfortunate lady members only had the use of some bushes outside the bandroom.

There are many stories to be told about the band. One of them records that on Christmas Day rounds, and after many double (and even triple) whiskies, the playing left quite a bit to be desired. The Band was at one of many ‘big houses’ that they visited, and once more received the hospitality of the house, the bandmaster told his men to “stand back to back and gi’e a good blow, lads, nobody’ll know t’difference”. Standing thus half the Band played ‘Colonel Bogey’ while the other half played Shepherds Watching Merry Gentlemen on the Feast of Stephen. On another occasion the Band were engaged to play at a Zoo, in the afternoon and again in the evening. The problem was that the Zoo management had advertised a different band for both performances. After the afternoon performance the Band were fitted out with some more uniforms (from the Zoo) and played their evening show under an assumed name. Their reward for this dual performance was five shillings and whatever they could collect.

In 1968, the Centenary year, it was mentioned that Mr Fred Turner was the longest serving, playing, member of the Band. His son, Harry, had played for the Band for thirty years. Harry continued to play for the Band until his death in 2002, and often had to take up the baton when no conductor was available.

Mr J Kane was mentioned as being, probably, the longest serving conductor. He held the baton form 1944 to 1964, a total of twenty years.

During 1967/1968 the band was reported to be of ‘good’ strength and, in that 12 month period, competed in various contests, winning four silver cups under the baton of Mr W Exley.

At this time the Band had a small, but active, Ladies Committee. They raised money in many ways to support the Band, being particularly helpful when they bought the present bandroom. Mrs Kathleen Turner, the wife of Harry Turner, was one of the leading lights of the ladies committee, and indeed, serves us well to this present day.

To celebrate its centenary, the band held a week of Social Activities between 13 May and 19 May 1968. To close the week, the Band played for the Anniversay Service at the Circuit Chapel, Bolton Brow, Sowerby Bridge. the climax to the celebrations was a dinner, for all members of the Band and their families, at the Crabfield Restaurant, Soyland.

Committee Members and Officials in 1968

Get in touch now: